I’d heard of the Tweed Run before, but as yet had not attended.  That all changed when we (the Vintage News crew and myself) went to the inaugural autumnal Tweed Run in London.  The sponsors of this season’s “metropolitan bicycle ride with a bit of style” were Ralph Lauren Rugby and as such the hordes of be-tweeded ‘athletes’ gathered outside their first European shop in Covent Garden. 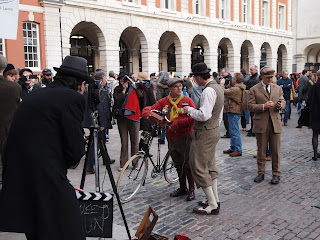 It was a very popular event, the initial 250 places were sold out within two hours of registration opening.  A further 50 places were then be won in the Rugby shop.  A call to a leisurely breakfast at 10am seemed to be taken up by the majority of the 300+ riders awaiting the off at 11.  We conducted a few interviews including Paul and Tina from Brooklands, along with some other splendidly dressed people. 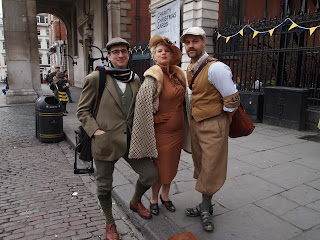 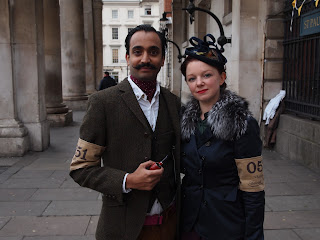 Although we didn’t have a chat with them this time, the Vintage Mafia ladies were looking lovely as always, kitted out for the most part by Ralph Lauren Rugby I believe. 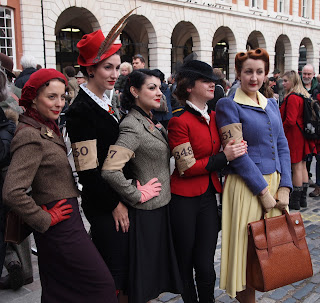 After lots of milling about taking photos (which was made bizarrely difficult by being entirely surrounded at some points by a wall of other photographers) the official Ralph Lauren Rugby picture was to be taken. 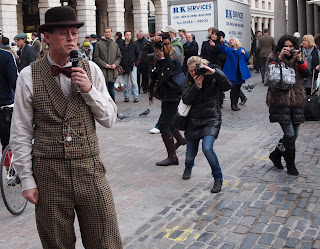 All the cyclists, some astride their Pashley bicycles, gathered in front of the Rugby shop making for quite an impressive sight.  We were very kindly asked if we could be in the picture by the official photographer.  So there we were, right at the front next to the quite fantastic band, whose name I regret to say I never found out.  In between shots I kept turning round to try and take a few of my own!  Nb. they were called the Flats & Sharps - thanks Teresa Stokes). 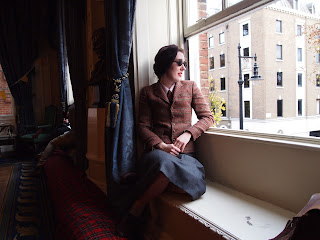 I was a little apprehensive when we decided we were going to cover the Tweed Run, mainly due to my lack of tweed.  All I had in my repertoire was a J G Hook jacket (which I have yet to decide whether it is a small ladies jacket – it has a nipped in waist, or a jacket for a young boy – the buttons are on the right?).  Anyway, it didn’t matter in the end as for many it was the overall look rather than an abundance of tweed.  By no means did this mean the event was in any way lacking in the “champagne of fabrics”. 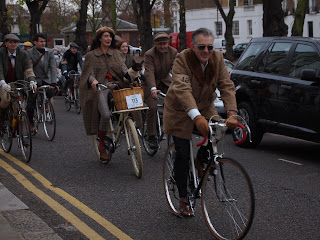 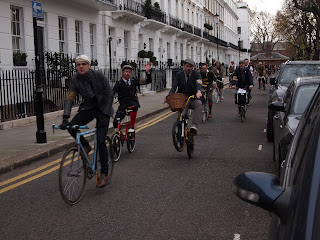 Along with my russet coloured jacket, I had a mid-grey calf length skirt, a deep pink and white striped shirt (courtesy of my Father, perhaps best not to tell him!) a brown tie (again, thanks Pater - I really should stop stealing his things) and a dark brown beret.  On paper this doesn’t seem like a particularly harmonious combination but it worked surprisingly well.  Teamed with the 1930s tortoiseshell sunglasses I have managed to purloin from Keiren, I rather had the look of a Weimar expressionist film maker.  Don’t you just hate it when that happens? 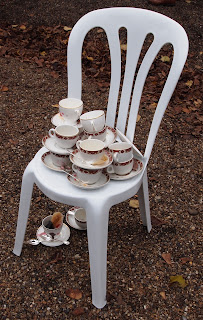 Despite it being only a twelve mile amble through the metrop. (although I think it actually stretched to 13 by the end) it was deemed necessary in true chappist fashion that a break was needed half way through for tea and cakes.  I forget who supplied the comestibles, (I really should take more notes) but they were very lovely indeed. 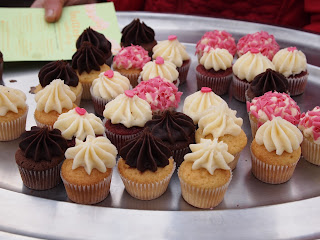 The tea party took place in a little square in the middle of Chelsea, where we were treated to two bands playing amongst the big dining room tables. 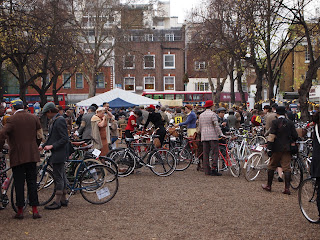 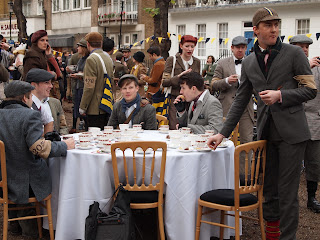 There were a few well known faces (including Erin O'Connor) among the cyclists, both those from the vintage scene and televisual personalities (Made in Chelsea anyone?). 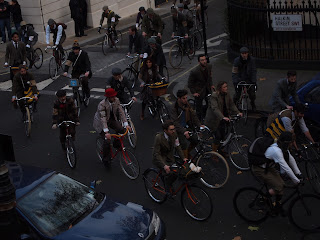 On to the final destination, which was a mystery to those riding but we were given a nudge and a wink in the right direction as we needed to take our motor car.

The finish line as it were, was the Caledonian club, just off Belgrave Square.  A beautifully decadent building, we knew we were in for a treat. 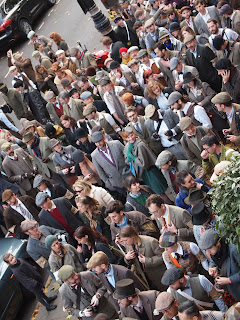 We arrived there and hour and a half early, followed a few minutes later by all the cyclists.  After a few frantic minutes setting the rooms up, everyone was allowed in for more tea (of course!) and getting ready for the Best Moustache competition as judged by Murdocks.  As it took place in the month of Movember, there was quite an array of upper lip plumage to choose from.  Sadly we had to return to Brighton early so we missed the various accolades which were handed out which also included most Dashing Dame.

Well done to all the organisers (especially Teddy who we interviewed during the tea break) and marshalls for making such a successful and enjoyable event. 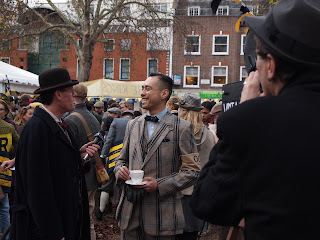 Similar events popped up in Florence and New York earlier this year which hopefully means Tweed clad bicycle rides may become more commonplace, if not the norm (ok, I may be being a touch optimistic there).  We’re very much looking forward to the next London event in April and hopefully at least one of us will be on two wheels! 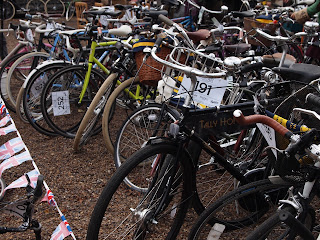 For more information about the Tweed Run, these may be of interest...

Footage from the Tweed Run:

Part One: Pre-race and the starting line.
http://www.youtube.com/watch?v=mfbCBbc5ZXo&feature=BFa&list=UUk62f_ZaVYhZiu3QeAFiC_g&If=plcp

Part Two: The half-time tea party and finish line at the Caledonian Club
http://www.youtube.com/watch?v=mOygOHd3Avo&feature=BFa&list=UUk62f_ZaVYhZiu3QeAFiC_g&lf=plcp
Posted by Miss Doherty at 14:56 2 comments: