The first Brighton Vintage and Lifestyle bloggers meet up

Just a quick post to let you know about something that I've been setting up behind the scenes with Hayley and Mat.  We thought it would be nice to have a little meet up for all the bloggers and vintage-types in and around Brighton.  It's on the 30th July (the Tuesday after next) at Cotton Tail Club at Above Audio on the Seafront.
Here is the facebook event for a bit more info.


We felt it was about time that all those people you see online but have never met in real life could get together, socialise, network, maybe buy a few bits and bobs and generally have a lovely time. 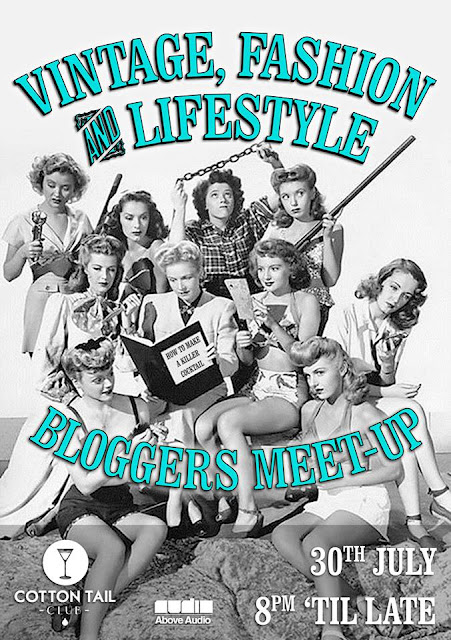 If you click that you're attending, you'll be in with a chance of winning a bottle of Bootlegger whiskey courtesy of our lovely sponsors, and even if you don't win, there is a free Bootlegger cocktail waiting for you (while stocks last of course)!  As ever with the Cotton Tail Club, all cocktails are half price (my favourites are the London to Brighton, Mai Tai and Waters of March - yes I've gone through the whole menu).

Entertainment will be provided by your favourite trio of vintage wax-spinners, The Gin Slingers.  We (for I am one of said Gin Slingers) will be playing the best the 1930s-'60s have to offer - the hottest rhythm & blues, rockin' roots of rock 'n' roll, big band swingers and many more, all on lovely, shiny vinyl.


As well as delicious cocktail deals and tunes to shake your tail feather to, we also have lots of lovely stalls showcasing the best of Brighton businesses (go alliteration!) including:


·         Bespoke hats and headpieces from vintage inspired milliners, B Millinery

So, if you're free on the 30th and fancy popping by - whether you're a blogger, vintage or just fancy a sip on a Gingerbread Manhattan, do come along.
Posted by Miss Doherty at 23:03 1 comment: Links to this post

Email ThisBlogThis!Share to TwitterShare to FacebookShare to Pinterest
Labels: Brighton

...a school sports day where the children are very well dressed and rather drunk

These posts have become a bit out of chronological order, but I've gotten so far behind (sorry it's been almost a month since my last post) that I'm just going to write what springs to mind first!

I was looking back through my past posts and realised I've never actually written about the Chap Olympiad.  This year was the fifth time I had attended since 2008 and the third with The Vintage News.  I simply adore going to the Olympiad as it seems to be an excuse for all my favourite people from the vintage scene (many of whom I first met at previous olympiads) to get together, drink inordinate amounts of gin and lark about in ridiculous 'sporting' events.
In my official capacity, I was there to take photos and film but I spent most of my time catching up with old friends and eating (my gin and tonic cupcakes went down a treat!)  I spent a lot more time behind the camera than in front of it this year, but I did manage to get in a quick interview with Jeni and Fleur - it was ever so professional and there was much talk of lovely spreads and trinkets!

It was also the first year I've taken part in one of the events - Bread-Basketball.  No-one (including the umpires) knew what we were meant to be doing as it was one of the many new events, but it involved sitting at a dining table, trying to stop bread rolls being flung over our heads. Very Drones club, but with the waiters not the diners utilising the baked missiles.
My main thought when choosing my outfit was to pick something I wouldn't roast in (it was 30°C for much of the day).  I decided to go for a 1950s grey cotton dress with white embroidery which I teamed with a large straw hat that I had to decorate in the car because I ran out of time.  I also decorated a fan, which those of you that follow me on instagram may have seen.  If you would like to get your hands on your very own personalised fan, keep an eye on the blog (exciting news soon!) or email me at sadiedoherty@hotmail.co.uk.
Two dear friends (Russell Nash and Zack Pinsent) were well-deserved winners of the gold and bronze cravats, respectively, although I think Sara should definitely won the best accessory!

If you want to see more wonderfully dressed people, some fairly vicious umbrella work and a bit of limbo (yes, really) there are many more photos on The Vintage News website.

* I was having some problems uploading some pictures, so more will be added when I have more time, thanks for looking at what's here!