With the release of the latest issue of The Chap magazine (featuring the very lovely Diana Dors on the cover), I thought I would put up some pictures from the photoshoot I did for that very same publication.


It all came about because my dear friend Viv the Spiv asked me to be 'his lady' for a photoshoot about correspondent shoes, to be featured in the Dec/Jan 2012 issue of The Chap.  The story for the shoot was essentially the plot to 'The Gay Divorcee', with a woman trying to obtain a divorce by being caught in an adulterous situation, they too end up in a Brighton Hotel!

I was to play the unhappily married woman, who was hoping to be 'caught' by a Private Detective while in a hotel room with... gasp... a man that wasn't my husband.  Cue Viv the Spiv.  And you thought it would just be some pictures of shoes?  The reason for the link between divorce and two-tone brogues dates back to a famous divorce case in the '30s where the whole case hinged on a photograph of a pair of correspondent shoes being left outside a hotel room. 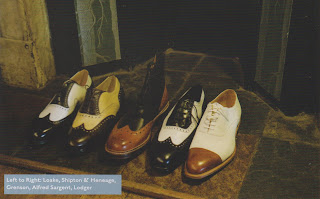 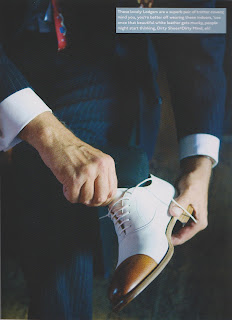 I was meant to look scared at the prospect of Viv coming through the window and anything untoward happening before the Private Eye came in.  In the end I was overcome by Viv's charm (who wouldn't be?) and we left the hotel together, much the same as Fred Astaire and Ginger Rogers had done in the aforementioned film.

My outfit consisted of a Vivien of Holloway Pencil skirt, jacket with a detachable faux fur collar that my mum found in a charity shop, a hat made by me, CC41 suede gloves, '70s heeled brogues and for the photo in bed, a beautiful 1940s Chinese silk dressing gown.  When I first received a call from the editor of the Chap asking if I had any vintage nightwear, my first thought was: 'this photoshoot is taking quite a different direction than I was expecting' but then I realised I had the dressing gown which worked brilliantly.  It's just a shame you can't see more of it.  When I eventually get 'round to taking photographs of all my clothes (mainly so I can remember what I've got!), I'm sure they'll get put up here. 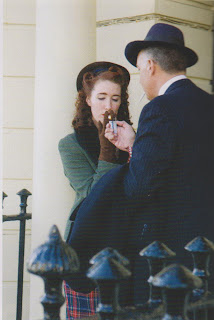 Viv was very sweet when taking the photograph of him lighting my cigarette as he knows I don't smoke.  However, I was more worried about naked flame being that close to my Utility gloves!
Anyway, I had an awful lot of fun at the photoshoot and it was an absolute dream to be in a magazine I have been an avid reader of since 2005.

As I mentioned Diana Dors at the beginning, I thought I would relay a funny story I once heard about her.  When she went back to her home town of Swindon to open a church fête, the vicar wanted to introduce her by her real name (Diana Fluck) as she was a local girl done good.  In all the excitement, and being a little anxious at mispronouncing her surname, he ended his introduction with "...Ladies and Gentlemen, Miss Diana Clunt."  Vicars, eh? 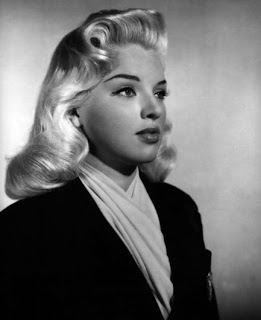 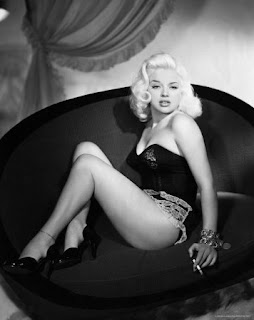 Posted by Miss Doherty at 14:59 No comments: Links to this post 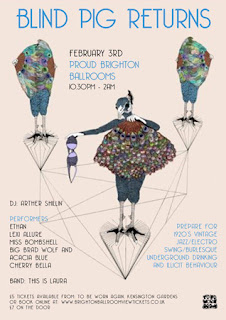 We stopped off for a quick drink (at the Bristol Arms if you're interested) before heading on to Blind Pig at the Proud Ballroom in Brighton.
﻿﻿﻿﻿


The night was organised by Carolyn Watt, an established aerial performer and fashion student.  The Blind Pig started out as a fundraiser for her end of year show, organised with her fellow students.  This was the first time it was solely under her leadership and we were interested to see how it went.

The night's entertainment came thick and fast, which meant a fair amount of dashing about the place by us with a plethora of cameras (and our fancy new mobile light).  As we arrived, Ethan (the first male pole dancer I've seen) was performing a very athletic routine.  Seeing a man pole dancin,g somehow highlights how strong you have to be to accomplish some of the moves.

Next came a traditional burlesque fan dance from Cherry Bella.  I was particularly impressed with her outfit, a very nice mix of pastel pink and blue satin. 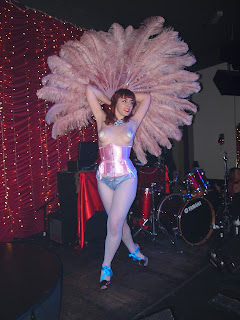 Burlesque nowadays is often solely associated with well dressed ladies becoming rather less-dressed, but it has a fine tradition/association with comedy too, (Mae West started out as a comic performing in between the striptease acts).  With this in mind, came the first double act of the night; the Big Brad Wolf and Acacia Blue performed a rather amusing burlesque centreing around a robbery - gun included!  It's always refreshing to see people trying something new in burlesque. 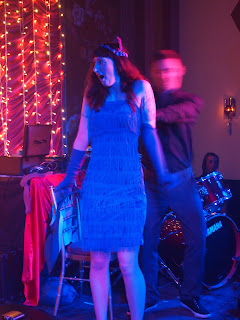 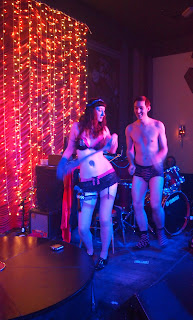 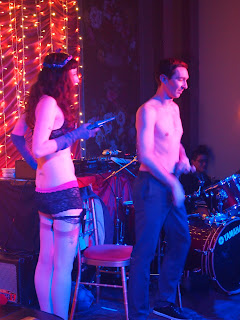 Miss Bombshell was up next, performing another pole routine to the evocative 'El Tango de Roxanne' from Moulin Rouge.
﻿


Lexi Allure, who I believe made her own costume, was another traditional burlesque dancer.

Ethan appeared again, but this time in a two person pole routine.  Joined by Miss Steel, what followed was quite an innovative display of strength and athleticism.

A second appearance from Cherry Bella rounded off the burlesque performances of the evening.  In an intricate black outfit, she lit up the stage with her fire breathing act (sorry, that was awful) .


As promised, there was a live band in the form of This is Laura, whose music perfectly suited the mood of the evening.  Kieren interviewed some of the band later on, but you can see that when we release the footage. 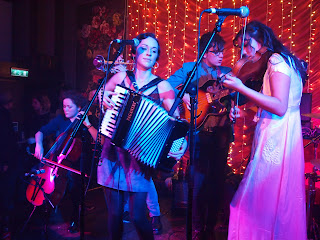 After all the live performers had appeared, DJ Arthur Shillin' (oh, I do love a good pun), who had been playing in between acts, continued with the rest of the night's entertainment.  He played almost exclusively electroswing, but did include some swing music from between the wars.  I did also manage to get a couple of dances with fellow blogger Jennie (of Fancy Dresscapades fame).  She too was there taking the odd snap and being interviewed by professional media types (well, me).

Normally I'm more comfortable wearing clothes from (or styled as though they were from) the 1940s and '50s.  However, as this was a Speakeasy, it would be churlish to not go for full flapper finery.  I'm slightly limited when it comes to 1920s clothes (I've got a black lace '80s-does-'20s number or a very fragile original peach silk and lace frock, but that wouldn't really do for dancing).  In the end I went for a modern dress in a vaguely '20s casual day style (replete with obligatory sequins).  I had great fun waving my hair and pinning up the curls at the back, in order to simulate the shorter styles so in vogue at the time. 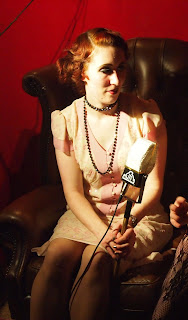 I'll soon have a post on how to do said hairstyle, but for now that is all from me.
Posted by Miss Doherty at 16:39 No comments: